Dean Harry E. Groves, on the left, speaks with Governor James B. “Jim” Hunt during the dedication of the Albert L. Turner Law Building.

Groves served as the dean of the North Carolina Central University School of Law from 1976 to 1981. He oversaw the move to the Turner Building, named after the school’s first African-American dean, who served for 23 years. In 1979 Groves proposed an evening law school to give working people who wanted to become lawyers more flexibility. It opened in 1981 and until the mid-1990s was the only evening program between Washington, D.C., and Atlanta. It remains the only evening program in North Carolina. Jim Hunt was the 69th and 71st governor of North Carolina and the only one to serve four terms, 1977-1985 and 1993-2001. 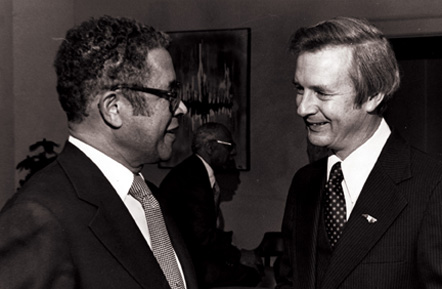