Durham attorney C. Jerry Gates argued at the North Carolina Central University Law School’s founding in 1939 that having black faculty “would have gone a long way in disabusing the average Negro’s mind of the popular notion that the Negro can’t serve in such capacity and to a great extent that he is prohibited from practicing law in the South as the white lawyer does.” In 1941 three full-time black instructors were hired, among them Albert L. Turner. A year later he became the first African-American dean as well as the first full-time dean of the North Carolina Central University School of Law. During Turner’s 23 years in this role, the first women were admitted in 1944 (boosting enrollment to seven), the American Bar Association accredited the school in 1950, and an alumni organization was established. The Albert T. Turner School of Law Building is named in honor of Dr. Turner for his contributions and years of service to the university. 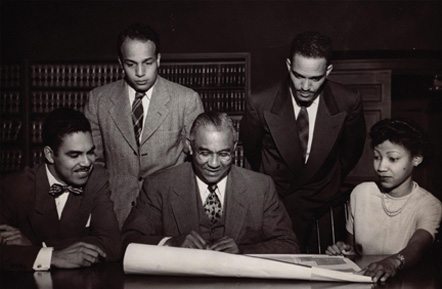