Although the historic Supreme Court decision Brown v. Board of Education had declared “separate but equal” schools inherently unequal, each state was allowed to decide its own response. North Carolina instituted the Pearsall Plan, which allowed schools to remain segregated unless legally challenged. Although students were now allowed to apply for reassignment to schools of their choice on the basis of factors other than race, African Americans were asked to remain in their segregated schools voluntarily in order to avoid civic unrest.

Despite many obstacles, African Americans not willing to comply with voluntary segregation submitted 225 reassignment requests for the 1959-1960 school year. When only eight of these requests were approved, they turned to litigation. Central to these proceedings were attorneys Conrad Pearson, Hugh Thompson, Floyd McKissick, William G. Marsh, and John H. Wheeler, pictured here from left to right.

A 1962 opinion from one of these cases summarizes some of the details of this period:

The first of these suits, Wheeler v. Durham City Board of Education, was brought in April, 1960, by 163 Negro pupils, and their parents, protesting the maintenance of segregated schools in the city during the 1959-60 school year. The second, Spaulding v. Durham City Board of Education, was instituted in September, 1960, by 116 Negro school children, and their parents, including many of the same individuals who filed the Wheeler suit, similarly protesting the continued segregation of the schools during the 1960-61 school year. … The complaint in each case requested an injunction against the continued assignment of pupils to schools on the basis of their race and against imposing upon Negro pupils seeking reassignment criteria which were not applied to white pupils seeking transfers. … Moreover, the evidence shows that, despite the board’s dutiful resolution, it has continued to utilize the dual attendance areas, if not the very maps themselves, to maintain segregated schools in the city.

True action was not taken towards school desegregation until the mid-1960s, when the school board approved over 100 applications for reassignment (at the threat of losing federal funding), and was not fully achieved until the 1969-70 school year. 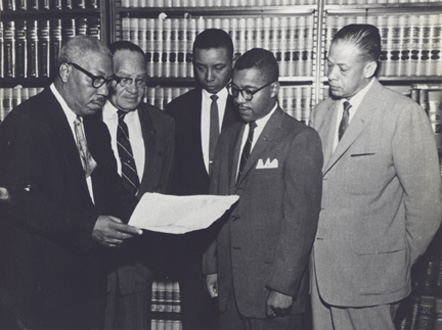