African-American Firefighters at Station No. 4

Durham’s ten original African-American firefighters at Station No. 4: Walter Thomas, Elgin Johnson, George W. King, Velton Thompson, Robert Medlyn, John O. Lyon, Nathaniel Thompson (who became Durham’s first black fire chief in 1985), Sylvester Hall, Thomas Harris, and Linwood Howard. Durham had had a black fire brigade in the past, the Excelsior Hook and Ladder Company, which was dissolved in 1913. At the prodding of the politically powerful Durham Committee on Negro Affairs, a formal black fire company was reestablished by Mayor Emanuel J. “Mutt” Evans, mayor from 1951 to 1963, although the department remained racially segregated. The ten men were under the command of the white captains Herman O’Brian and J. A. Miller. The African-American firemen operating from Station No. 4 felt segregation’s effects, having inherited outmoded equipment from their better-equipped white counterparts. As more facilities became integrated in the ensuing decades, so too did the fire department. The original ten were dispersed across the system and their chances for promotion increased. 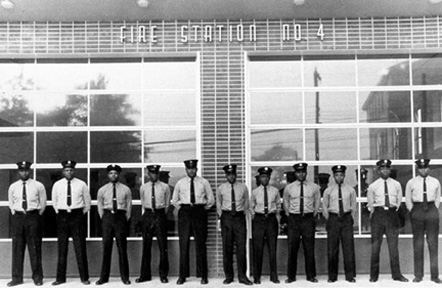