The Wonderland Theater was built in 1920 by Frederick K. Watkins at the southwest corner of East Pettigrew and Ramsey streets. Watkins, the self-described “Movie King,” built the first African-American theater in Durham in 1913 and went on to own 16 theaters throughout North Carolina, South Carolina, and Virginia during the 1920s. The Wonderland initially showed silent films with musical accompaniment by Mrs. Hattie Shriver Livas, who created music appropriate to each scene: “For horror movies a creepy sound, playful tunes when children appeared, soft flowing tunes for the love scenes, and ‘oh so many creations to follow the theme of the pictures.'” Live acts also performed at the Wonderland. Hayti resident comedian, singer, dancer, and actor Dewey “Pigmeat” Martin supposedly got his start there. When Watkins retired from movie theater management at the end of the 1920s, the Wonderland was closed. The site hosted a variety of businesses in subsequent decades: a union hall, barber shop, a Goodwill store, a package store, the John Avery Boys Club, grocery stores, and apartments. The building was abandoned in the 1970s and torn down in 1977. 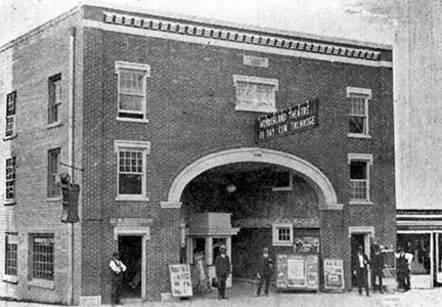