These Venable Tobacco Company warehouses were built in the 1930s across Roxboro Street from Venable’s main facilities. They and most of their surrounding structures were razed with urban renewal funds in the late 1960s. In 1993 the Durham County Detention Facility and grounds were built where the Venable warehouses once stood, and the new courthouse opened next door in 2013. These two civic structures form the Durham County Justice Center.

This area immediately south of East Pettigrew Street and east of Pine Street (today’s Roxboro Street) held a variety of buildings during the last quarter of the 19th Century. Durham Tobacco and Inspection Company built the northern two bays of the Venable Tobacco Company warehouse at Roxboro and Poplar streets on the site in 1905. An L-shaped, masonry building and ironclad “dry house” were added next to an older prize house on the site, and these were also leased to Venable Tobacco. The prizery, which still stands today, was rebuilt as a three-story structure of slow burn construction most likely around 1930. A large, two-story metal-clad redrying plant and a building for stemming and hanging appear to have been built at the same time, giving the company a greatly expanded capacity. In 1969 the stemming and hanging building, redrying building, and cooper shop were nearly destroyed by an immense fire. What was left continued to function as a tobacco facility until the 1980s, when the prizery was purchased and partitioned for use as office spaces. The old warehouse building was used by a number of construction/architectural salvage businesses, beginning with the Summer Beam and the Building Recycling Center and later by Peters’ Design Works. In 2002 Scientific Properties purchased the complex and in 2004 began renovating the prizery building and receiving room. These renovations were completed in 2006. 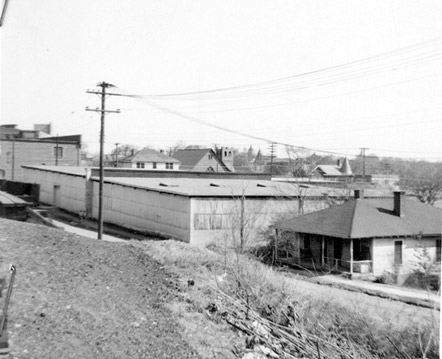