In the late 1950s the United States experienced a wave of urban renewal projects, an initiative to renew America’s decaying urban centers that was partially funded by the federal government. Durham’s 1960 ballot featured a bond issue for urban renewal projects and for an expressway to Research Triangle Park that would bisect the Hayti community. Although many conservatives opposed the bond issue, it passed by a small majority of about 3%.The Durham Redevelopment Commission was formed to oversee seven different projects, including the redevelopment of the African-American Hayti neighborhood, downtown Durham, and the neighborhood surrounding North Carolina Central University.

Grievances related to the projects were quelled by the promise of renewal—that the “urban blight” of dilapidated buildings and condemned houses would be replaced by better accommodations. As these promised accommodations failed to materialize, an outcry was raised, especially among poor African Americans who had lost their homes and communities.

The result of urban renewal did not match its promise for a number of reasons related to leadership, local management, unforeseen side effects, and racial bias. Many also felt that poor blacks were hoodwinked by their own middle- and upper-class leaders. Urban renewal became known as “urban removal.”

The neighborly ties, integral authenticity, and rootedness of places that had grown organically by their own vitality were gone. … The pain of losing one’s build environment was greater than anyone had anticipated. As buildings disappeared, the few that were left became dearer and harder to part with. The shocks of urban renewal everywhere and a deep nostalgia for what was gone may, in fact, have had much to do with the tide of historic preservation that swept the country in the bicentennial years, touching Durham, too, with notable results. This was perhaps the saving grace of urban renewal. 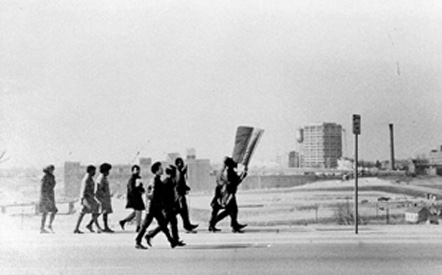