The John L. Markham Cash Store, the first commercial brick structure in Durham, was built before 1881. The store’s owner was also town clerk and treasurer. Located at the southwest corner of Main and Mangum streets, the building was demolished before 1895 and replaced by a larger, three-story one that housed the Sneed-Markham-Taylor clothes store on the first floor, a printery on the second floor, and the Knights of Pythias on the third floor. In 1932 the Kress Company demolished the building and constructed a beautifully embellished Art Deco structure, to which it moved from its previous location at 113 West Main Street. Many of the surrounding buildings were demolished during the urban renewal period, leaving the Kress Building standing alone on the west side of Mangum Street. Kress operated until the 1970s, when it was converted to office space. The structure now houses condominiums. 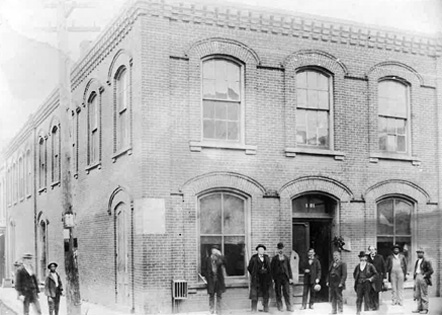