Police Officer on Motorcycle with Sidecar

This photograph of a police officer on a motorcycle with a man seated in the sidecar, estimated to have been taken in the 1920s or 30s, is indicative of the transportation used by the police department at the time. The police department was established in 1880, but did not acquire its first modes of transportation, two bicycles, until 1910. The bicycles were replaced in 1916 by a hand-cranked paddy wagon, replaced a few years later by a small fleet of Model T Fords. One-way radio was upgraded to two-way in 1938, about the same time the department acquired a three-wheel motorcycle.

Today the Durham Police Department’s fleet consists of 171 marked cars and 167 unmarked, 80 special use vehicles, 15 Forensic Services Unit (FSU) vehicles, 8 motorcycles, 3 utility terrain vehicles (UTV), and 1 electric car. The department also employs a car painted to look like a police car in the front and a taxi in the rear, used to reinforce an important message: it’s far more expensive to get caught driving drunk than to call a taxi to take you home. 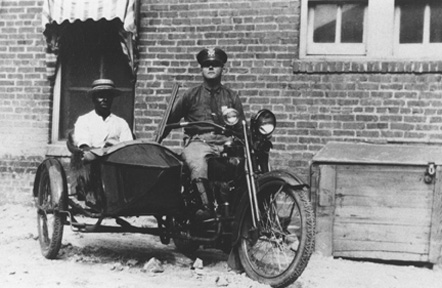