To meet the evolving needs of Duke’s law students and practicing lawyers, Duke University’s Law School Library has undergone significant changes since it was founded. Originally housed in a wing of the general library, it has expanded from 4,000 volumes to include over 625,000 volumes and hundreds of databases. The first electronic search service became available in 1977 and the library’s catalog became available online in 1986. In 1989 the Law Library, housed in the 1963 law school building, was renovated. The library was rededicated in 2008 after a complete renovation. A picture of this common room in Duke’s School of Law library in a 1972 history of the school is captioned, “The learning provoked by thoughtful study in the Law School library is put to the practical test in the Law School courtroom.” 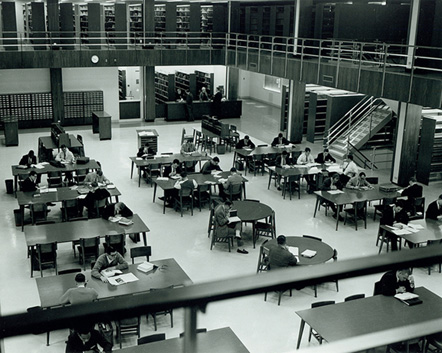