Floyd and Evelyn McKissick escort their daughter Andree and friend Henry Vickers into Carr Junior High in 1959. Shortly after the United States Supreme Court’s landmark 1954 Brown v. Board of Education ruling, which determined that separate but equal schools are inherently unequal, African-American leaders began to push for school desegregation. In the 1959-60 school year, the first eight reassignments of black students—out of 225 requests—were granted, integrating Brogden, Carr, and East Durham junior high schools and Durham High. While Floyd McKissick gained a national reputation as a civil rights activist, his entire family was involved in the pursuit of racial equality and were among the first to test the limits of Brown v. Board. Evelyn McKissick was an outspoken proponent of school desegregation, as her daughter Charmaine McKissick-Melton remembers in a 2010 guest column in the Herald-Sun:

…it was my mother, Evelyn McKissick, whose name was on the 1957 school integration lawsuit that led to Joycelyn’s graduation from Durham High School. My mother believed in school desegregation and fought for the right of her children to attend the school of their choice. My mother watched over all of these brave kids. “Don’t mess with my children,” is what she always used to say, “because I’m going to be there to tell you about it.”

Floyd and Evelyn McKissick’s legal action resulted in all four of their children attending white schools. In 1960, oldest daughter Joycelyn was the first African-American female to graduate from Durham High School. In 1963, Charmaine and her brother Floyd Jr. were admitted to North Durham Elementary School, among the first wave admitted at the elementary level. Even after these first students passed the threshold of previously white-only schools, complete desegregation did not occur until the courts ordered it in 1970. 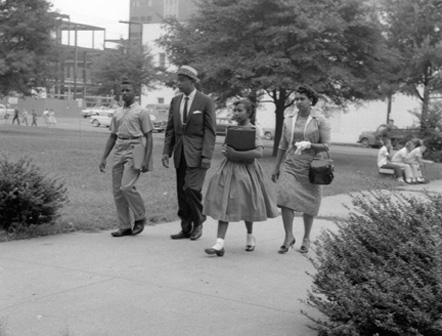