This float in a parade passing by the Durham County Courthouse (built 1916) on Main Street depicts the global reach of the American Red Cross. When World War I broke out in Europe in 1914, the American Red Cross had 107 chapters. By the end of the war, it had expanded to include 3,864, including one in Durham County. It was begun by Annie Watts Hill, wife of Durham banker, lawyer, legislator, and philanthropist John Sprunt Hill, who pitched the idea to the Daughters of the American Revolution. Hill was elected chairman, and the first meeting was held April 4, 1917. Soon the organization occupied offices on the first floor of City Hall. Initially, Durham’s Red Cross work consisted almost entirely of producing surgical dressings and clothing for U.S. soldiers, but they later charged themselves with looking after soldiers at every point along their military career. As one chapter executive wrote in the 1940s, they were sure to “”give our boys a good send- off. . . .Every enlisted and drafted man who left Durham was given a Durham Duplex razor, a fine box lunch, and several packages of cigarettes.”” They also established a canteen service for soldiers passing through to military bases and began a civilian relief program. The chapter embarked on a successful war fund campaign and donated two ambulances that were sent to armies fighting in France. After the war, the Red Cross Home Service was established to accommodate returning soldiers.

The local chapter went on to assist those in need during the Great Depression, World War II, the Korean War, and beyond, gathering funds, assisting in hospitals, collecting blood donations, and helping with national disaster relief efforts. It now exists as the Triangle Red Cross. 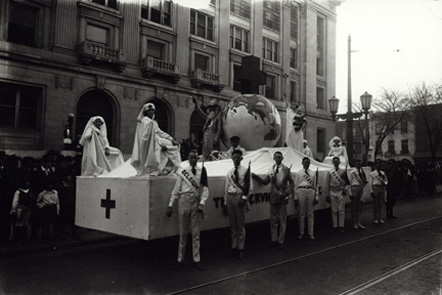