William H. Murdock (1904-1982) (at left), received his law degree from the University of North Carolina at Chapel Hill in 1927. Before being elected county solicitor (today’s district attorney), he was prosecuting attorney for the Durham County Recorder’s Court from 1928 to 1930, and Recorder’s Court judge from 1936 to 1938. In 1939 he became solicitor for North Carolina’s 10th Judicial District, of which Durham was then a part. He served in the United States Navy from 1944 to 1945, which took him to Europe and the South Pacific. Upon his return to Durham in 1945, he resumed the position of solicitor, which he held until 1961. After a failed congressional bid, President John F. Kennedy appointed Murdock United States Attorney for the Middle District of North Carolina in 1961. President Lyndon B. Johnson reappointed him to the position in 1965. He gave up the office when Richard Nixon was elected in 1969.

This photograph was taken in the 1950s at a meeting of the Durham County Bar Association. Pictured, left to right: William Murdock, R. Bruce White, A. J. Gresham, Art Vann. 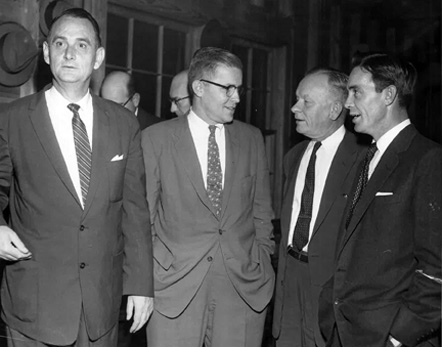