In 1937 Croatan county commissioner Tom Haywood built a self-kicking machine. It operated using a hand crank connected to a wheel that turned four old shoes on the ends of spokes. Although he built it for personal use, “to perform the needed rebuke to my conscience,” word of the contraption got around and soon tourists were stopping by on their way to the beach for a swift kick to the seat of the pants. The local curiosity attracted national, and on occasion, international attention, as it booted the derrieres of the world’s political and Hollywood set: North Carolina governors, the baron and baroness of Bern, Switzerland, Lucille Ball, and President Harry S. Truman all were reported to have made stops at the kicking machine.

While the original machine has been moved to the North Carolina Museum of History in Raleigh, a replica is still kicking at Haywood’s old store outside of New Bern. 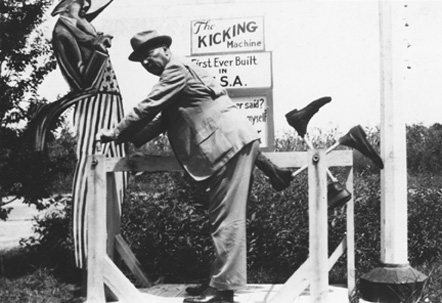