The Hotel Malbourne was constructed in 1912 on the northwest corner of East Main and Roxboro streets. It was a modern, luxury-class hotel built for the well-to-do traveler. Named after Benjamin N. Duke’s father-in-law, Malbourne Angier, it was an imposing structure with a granite base, a huge copper cornice, iron balconies, and 125 rooms with steam heat, telephones, hot and cold water, and fifty private bathrooms. For eleven years it was the preeminent downtown hotel. Sunday dinner was a signature event, costing sixty cents in 1915, unless you preferred the “sizzling steak with French-fried potatoes and tomatoes,” which raised the price to seventy-five cents.

The new, luxurious Washington Duke Hotel became the hotel of choice in 1924. By the 1960s the Malbourne was serving as more of a boarding house than a hotel. In 1966, it, like so many other downtown structures, was demolished with urban renewal funds. In the 1970s, Durham’s new Judicial Building, the predecessor to the current Durham County Courthouse, was built on the site. 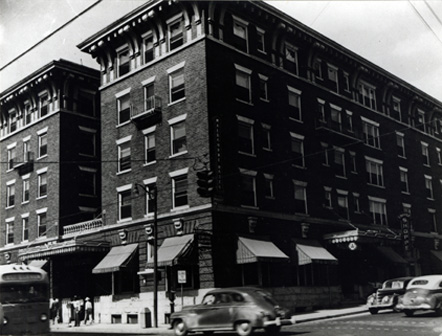