Durham’s second county courthouse, the oldest still standing, was constructed in a Neoclassical style in 1916. It was built to replace the earlier courthouse that had occupied the same site. When that courthouse became too small to serve the needs of the growing county, the county issued bonds for $336,466.76 to construct a larger facility, which was completed in 1916. The jail was originally located on the top floor of the structure, which led to complaints of prisoners shouting at passersby on the street. By the 1960s this facility was overcrowded, and a new courthouse was built in 1978. The 1916 courthouse continues to house county offices today.

Also pictured in this photograph is L&M Lunch, which operated on the bottom level of the Durham Hotel through the 1940s. 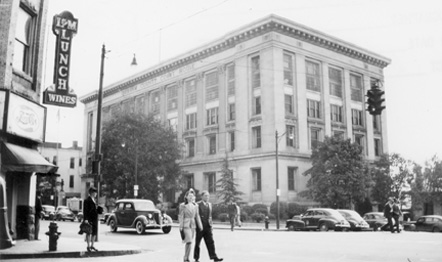