The Regal Theater, located on Pettigrew Street in the Hayti neighborhood, was built in 1927. It provided a variety of entertainment, including musical performances by luminaries including Cab Calloway, Fats Waller, Count Basie, and Duke Ellington. By the 1930s it had most likely become predominantly a movie theater. An excerpt from the Durham Business and Professional Chain’s promotional movie Negro Durham Marches On describes the Regal:

While this community offers many forms of entertainment to its citizens, probably the most outstanding is the theater. At the Regal, all ages congregate for wholesome and educational entertainment. Such diversion places this theater as an important part of Hayti’s life. G. W. Logan, its manager, realizes this and works closely with his theater chain owners in order to bring his patrons the type of entertainment they desire.

By 1970 the Regal had become Your Own Thing Theater, an important gathering spot for soul music. Your Own Thing was bombed in 1970, an act that was most likely racially motivated. The building was razed in the mid-1970s with urban renewal funds. 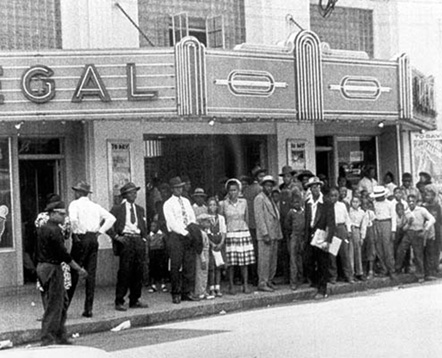