Daniel G. Sampson (center) was dean of the North Carolina Central University School of Law from 1965 to 1969, as efforts mounted to close it. In 1968 members of the state’s board of higher education contended that since African Americans could attend the law school at the University of North Carolina at Chapel Hill, the one at Central was unnecessary. Sampson successfully defended his school before the UNC General Administration:

More and more law schools are limiting their enrollment to the top five or ten percent of college graduating classes. The student graduating in the lower-upper or middle part of his class from any college is finding his chance of obtaining a legal education diminishing. Because of this, North Carolina College School of Law is in a unique position of performing an invaluable service to worthy and deserving students. 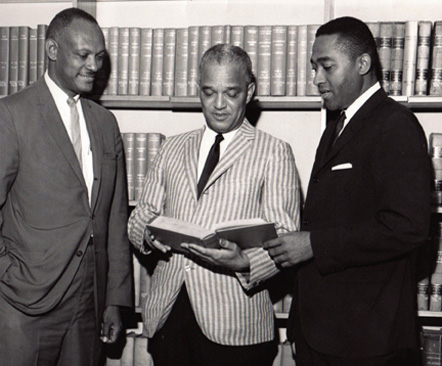