Seated at this table are some of the founders and original faculty and staff of the North Carolina Central University School of Law. Maurice T. Van Hecke was the school’s first dean; he concurrently served as the dean of the University of North Carolina School of Law. He was succeeded by Albert L. Turner, the first African-American dean and the first full-time dean of the school of law. During his tenure, in 1944, the school’s first women, Ruth Norman and Ruth Taylor, were admitted, boosting enrollment to seven. Turner oversaw the school’s accreditation process by the American Bar Association in 1950 and established the school’s alumni organization. The Albert T. Turner School of Law Building is named in honor of him for his contributions and years of service to the university. LeMarquis DeJarmon, the school’s fourth dean, rebuilt the school after a fire set by a disgruntled former student did extensive damage. 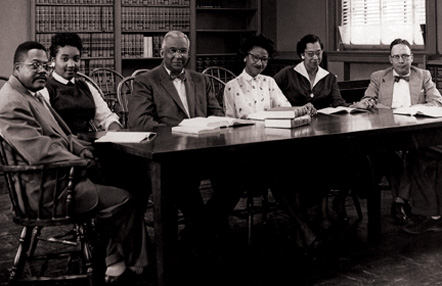