As the sit-in movement that had begun in Greensboro, N.C., swept across the South, Dr. King addressed a crowd estimated at 1,200 people at White Rock Baptist Church. Talking to the standing-room only crowd that filled the church, he counseled the crowd, “Let us not fear going to jail if the officials threaten to arrest us for standing up for our rights…Maybe it will take this willingness to stay in jail to arouse the dozing conscience of our nation.”

Dr. King made five public appearances in Durham and was scheduled to make a sixth on April 4, 1968. Instead, he cancelled to be in Memphis to lend his support to the sanitation workers’ strike. He was assassinated that evening.

Like so many other Hayti landmarks, White Rock was demolished by urban renewal and the building of the Durham Freeway. It was located where a freeway on-ramp is now situated. Funds were raised to construct a fine new church building farther south on Fayetteville Street. 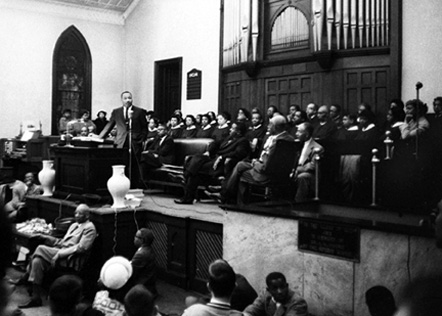