Louis Austin was editor and publisher of Durham’s historically black newspaper, The Carolina Times. He was a forceful spokesman for black rights decades before the Montgomery Bus Boycott or Brown v. Board of Education, and in a time when the Ku Klux Klan was an active threat. Originally sports editor for the Standard Advertiser in Durham, Austin borrowed the money to purchase a controlling share of the newspaper, which he renamed The Carolina Times and recast as forceful societal commentary. Durham historian Jean Anderson describes Austin as “an indefatigable crusader for justice and civil rights … of a new class of blacks who kowtowed to no one, and he made the paper an unrelenting crusader for all black causes, including in his coverage news that bore on race relations from all over the nation.” His forceful but fair-minded commentary and unequivocal call for civil rights contrasted with some of Durham’s other more conservative and conciliatory African-American leaders. Austin was the president of the Carolina Times from 1927 until his death in 1971. He was also a president of the Durham branch of the National Association for the Advancement of Colored People and a founder of the politically influential Durham Committee on Negro Affairs (now the Durham Committee on the Affairs of Black People). 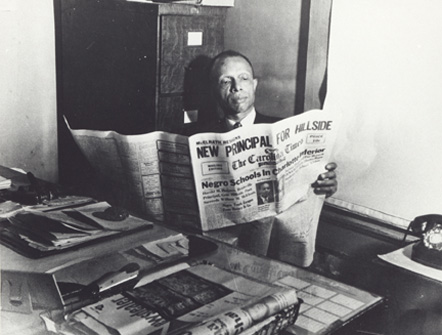