In 1950 Durham lawyers John Wheeler and Hugh Thompson represented the Durham Committee on Negro Affairs and others in a court case regarding inequality between the city’s black and white schools. Wheeler and Thompson were assisted by Virginia-based lawyers Oliver Hill (a recipient of the Presidential Medal of Freedom), Martin Martin, and Spottswood Robinson. The school discrimination suit Blue v. Durham Public School District was not initiated to address school segregation, but to address the equalization of funds and resources for black and white schools by laying out the “existing and extant differential in expenditures for the Negro and white schools in the city.” Inequalities included the hand-me down books from the white schools and the classroom furniture that “bore the marks of more privileged students’ use.”

On January 26, 1951, Judge Johnson J. Hayes ruled that the City of Durham’s school district must allocate equal funding for white and black schools. The opinion for the case, written by Hayes, reads:

By reason of the existence of more abundant building space for white children and the crowded conditions in the Negro schools, white children enjoy many superior advantages to those available to the Negro children, to wit: More and better supervision, greater extracurricular opportunities, better laboratory equipment and facilities in music and art, lighter teacher load, better recreational facilities and better accommodations. … The net result of what has been done still leaves the Negro school children at many disadvantages which must be overcome before substantially equal facilities are made available to the negro children.

Despite the victory, the case had little immediate impact on the school system. The lawyers did receive recognition from editor of the Carolina Times Louis Austin for “bringing to public notice the disparities between the Negro and white schools of this community. … They have dispelled forever the silly notion that Negroes cannot institute a lawsuit against white people without blood flowing in the streets.” Some small victories did emerge. In the wake of the decision, the City Council decided that an African American should be appointed to the school board, although this would not come to pass until 1958. Only in the 1969-70 school year were the city schools fully integrated. 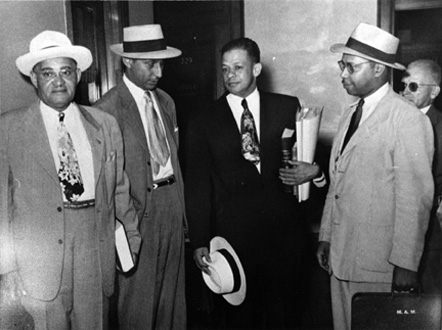