This photograph, taken from the top of the Washington Duke Hotel (which was imploded in 1975) in the 1920s, shows the intersection of Main and Corcoran streets. It provides a glimpse of some of Durham’s earliest downtown buildings. The Geer Building, which housed the Fidelity Bank, is in the foreground. Across Main Street is the First National Bank, and next to it on Corcoran Street, the Durham Hosiery Mills, which produced silk stockings from 1919 to 1969. Opposite Corcoran Street is the Croft Business School. The roof of the old post office is visible on the bottom right. It stood on the site the Hill Building (the Suntrust Building) has occupied since 1937. 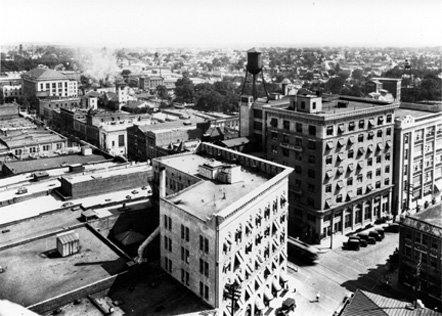