Former Governor Terry Sanford served in the North Carolina Senate from 1953 to 1955 and as governor of North Carolina from 1961 to 1965. During the gubernatorial campaign Sanford advocated for increased spending on education and, days after his inauguration, outlined what he termed his “Quality Education Program” to improve many areas of education in the state. He was president of Duke University from 1969 to 1985 and was elected to the United States Senate in 1986.

Before becoming mayor, Jim Hawkins chaired the Downtown Development Association to find ways to revitalize the city center. He also served on the interracial Durham Interim Committee established by Mayor Wense Grabarek in 1963, whose work resulted in the desegregation of many of Durham’s public facilities. Hawkins, mayor between 1971 and 1975, appointed a Durham Bicentennial Committee at Mrs. Margaret Haywood’s urging to celebrate that important milestone. He pushed the button to implode the iconic Washington Duke Hotel in 1975, inspiring the local historic preservation movement, and enlisted Durham in a Sister Cities partnership with Durham, England, in 1976.

Before becoming Durham’s mayor, Markham worked as an attorney in New York City from 1960 to 1965 and as a director of the United States Equal Employment Opportunity Commission in Washington, D.C., from 1965 to 1968. In 1969 Markham became the deputy assistant secretary for Metropolitan Development in Washington. Three years later, Markham was the assistant dean at Rutgers School of Law in Newark, New Jersey. Returning to Durham, he became an associate professor of law at North Carolina Central University School of Law, where he worked until he opened his own law practice in 1984. In 1981 Markham was elected mayor of Durham, exactly a century after his grandfather held the same office. He was reelected in 1983. Markham’s time in office marks the first wave of downtown Durham redevelopment. Brightleaf Square and the Civic Center began under his leadership. After he lost to Wib Gulley in 1985, Markham continued to campaign for the historic preservation of the Durham area, serving as a trustee of Durham’s Historic Preservation Society. 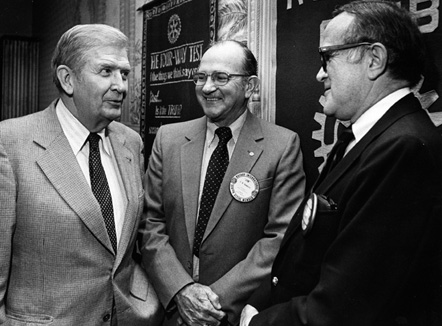