The Durham Committee on Negro Affairs was established in 1935, marking the beginning of the modern phase of the quest for civil rights in Durham. In this photograph the Committee is meeting with Luther Hodges, governor of North Carolina from 1954 to 1961 and United States secretary of commerce from 1961 to 1965. Described by Durham historian Jean Anderson as a “practical businessman … in tune with the nation’s foreign trade policies” with “relatively more provincial” racial views, Hodges took a conservative approach to limiting racial tension. He was hesitant to accept the Durham Committee’s demands, such as the desegregation of schools, for fear of disturbing civic peace. Speaking to Hodges is John Wheeler, president of Mechanics and Farmers Bank, an attorney and civil rights advocate who served as chairman of the Durham Committee from 1957 until his death in 1978. Louis Austin, the editor and publisher of Durham’s Carolina Times and a forceful spokesman for black rights, is seated immediately to Wheeler’s left. 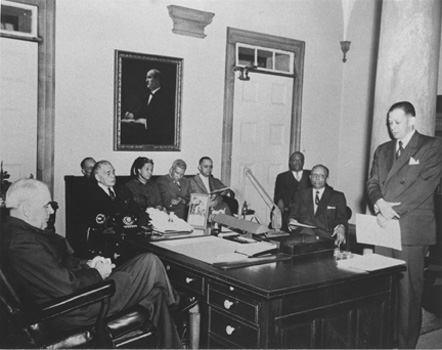