This bird’s eye view shows the freight depot in 1924 on the original site of Durham Station. In 1849 Durham physician Bartlett Durham LINK transferred a parcel of his land to the state to build a railroad station linking Raleigh with Hillsborough. The town of Durham, originally called Durham Station, grew up around the railroad, and the ready access to transportation allowed the tobacco industry to thrive. Eventually Durham’s population and economy grew strong enough that the town was incorporated and Durham County was created, formed from the land of western Orange and a small bit of Wake.

The railroad may have been the town’s lifeblood, but train travel was not necessarily held in high regard. Durham’s first historian, Hiram Paul, described the station in 1884 with the following words:

Railroad facilities are hardly adequate, only one train a day each way being allowed by the liberal policy of the Richmond and Danville system. The depot is a reproach, there being no reception room for either ladies or gentlemen, and the apartment used as such, and adjoining the ticket office, being so filthy an[d] offensive that ladies never apply for tickets, except in cases of absolute necessity. It is about 12×14 feet, and is used almost continuously by Negro section hands as a kitchen and sleeping quarters. The walls are black with soot and grease, and the floor is caked with grease and dirt.…It is to be hoped, however, that the importance of the city will arouse this mammoth monopoly from its complacent lethargy, and that decent facilities at least will soon been afforded.

Eventually Paul got his ʺdecent facilitiesʺ when Union Station began providing passenger service in 1905. Durham Station was then used primarily for freight and later, for transporting automobiles. In ensuing decades, as the train receded as the preferred means of travel and transport, depot after depot was demolished in Durham, so that eventually the auto platform at the original Durham Station site was the only remaining vestige of the early train industry in downtown Durham. It was demolished to make way for the Durham Performing Arts Center, which opened in 2008. 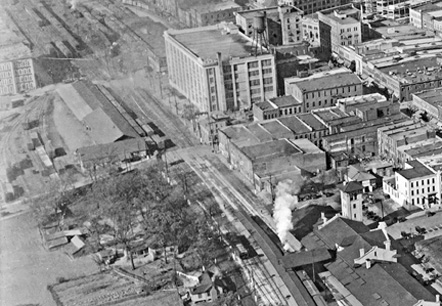