The first Durham County Courthouse was built in 1889, eight years after the county was established. County offices were originally located in Stokes Hall, at the intersection of Corcoran and West Main streets. When county operations outgrew this space, construction began on the monumental red brick Romanesque Revival courthouse pictured here. Its groundbreaking was a major event, attended by the town’s light infantry, both the African-American and white fire hose companies, and the Masons, who performed the “ritual anointing of the cornerstone with oil, wine, and fruits of the field.” Excavation and construction labor was provided by a convict crew, and the brick for the structure was fired at the county poorhouse.

By the mid-1910s space was at a premium, and the county issued bonds for $336,466.76 to build a new courthouse on the same site
as the original one. This would become the Neoclassical structure familiar to Durhamites today as the “Old Courthouse”—the Durham County Administration Building. In 1916 another groundbreaking ceremony was held. The contents of the original building’s cornerstone were transferred to the new cornerstone, which was again anointed by the Masons. 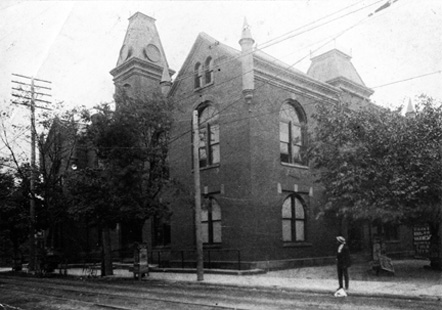