Left to right, Elna Spaulding, Lyda Moore Merrick, and Mary D. B. T. Semans. Elna Spaulding founded and presided over Women in Action for the Prevention of Violence and Its Causes, an organization that acted as a catalyst for cooperation and integration between whites and blacks in Durham. Spaulding was inspired after attending a 1968 national conference for women, convened to discuss how women might act to prevent the violence that had penetrated the Civil Rights Movement. She returned to Durham to build a group founded upon these ideals.

Lyda Moore Merrick was the daughter of North Carolina Mutual Insurance Company founder Dr. Aaron Moore and wife of Ed Merrick, son of Mutual founder John Merrick. In 1949, inspired by her blind friend, John C. Washington, she set up a library club and resource center for blind persons at Stanford L. Warren Library, Durham’s historically black public library. Using Braille and records, the club aimed to increase interest in educating the blind, offer recreational activities, and provide reading services for personal mail. After two years of successful programs and growing membership, Washington and Merrick collaborated in the establishment of the Negro Braille Magazine (now the Merrick/Washington Magazine for the Blind), the first issue of which came out in June 1951. Having secured assistance from the American Printing House for the Blind, Merrick culled articles from newspapers and popular African-American magazines. The magazine, the first of its kind, achieved national and even international circulation. “My father passed a torch to me which I have never let go out. We are blessed to serve,” stated Mrs. Merrick at age 92.

Mary D. B. T. Semans was born into a family known for its philanthropy, and she carried on the tradition. Durham Mayor William V. “Bill” Bell LINK said about her:

Many have said that when they met Mary Duke Biddle Trent Semans, they felt an immediate connection, as though they knew her. It was obvious that throughout her life, she felt that same connection to Durham. She knew our community, and had an undying devotion to it, to the benefit of everyone who calls our great city home. We are grateful for her leadership over the years on many civic and academic boards, and for her contributions to health care, to civil rights and to the arts. … Truly, Mrs. Semans represented the heart, the goodness, of Durham. 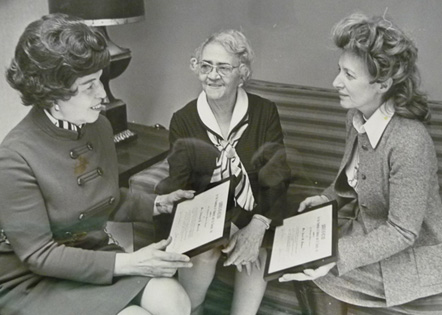