When Durham (population 250) was incorporated in 1869 after the Civil War, constables enforced the law. These early officials were selected by the board of alderman for a one-year renewable appointment. In 1880 J. B. Christian, constable since 1877, became the first official chief of police. Until the early 1900s, the aldermen appointed the chief for a two-year term, a decision typically more political than merit based. By the time this photograph was taken in 1894, seven chiefs of police had already headed the department, one of whom had only served 13 days. 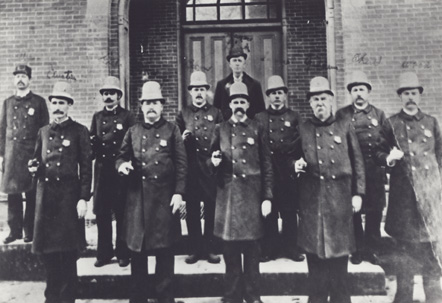