W. M. Piatt and Company completed the Durham City Water Works and reservoir, now called the Williams Treatment Plant, in 1917. The original filtration plant is a three-story brick Romanesque-Revival-style building with a one-story wing. The Club Boulevard trolley line took visitors to the reservoir and the trolley’s owners, the Durham Traction Company, promoted it as a destination that offered boating opportunities as well as a pleasant view. As more citizens adopted automobiles, the trolley was discontinued in 1930. The use of the reservoir for recreational purposes probably ended around this time also.

The plant expanded several times as Durham’s population increased, most notably in 1949-50 when it doubled in size with the addition of a stuccoed Art Moderne wing. Although the city considered demolishing the facility in the 1990s, it instead opted to restore the original buildings, an action that won an award from Preservation Durham. 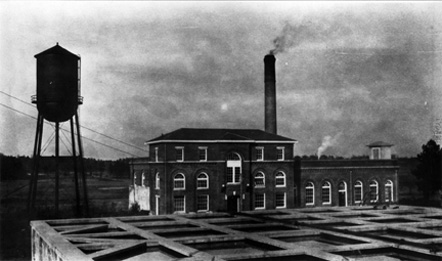