The Duke Law Building, pictured here, was dedicated on Law Day, 1963, with Chief Justice of the United States, the Honorable Earl Warren, as the principal speaker. Since then, the building has undergone an expansion and renovation from 2004 to 2008 to update its amenities and to give it a more compelling architectural presence, more in keeping with the architectural style of the Duke campus.

The teaching of law began at Normal College, the precursor to Duke University, in 1850. Initially conceived as a required course for all students, it became its own area of study to prepare students for the profession of law in 1868. The school’s president, Braxton Craven, taught both law and divinity singlehandedly. Following President Craven’s death, the instruction of law was abandoned, until it again became an academic requirement in 1887. The School of Law was reopened in 1891, only to be discontinued three years later for financial reasons.

The school was not established permanently until 1904, with an endowment set up by James Buchanan and Benjamin Newton Duke. Enrollment grew to around 100 students at the time Trinity became Duke University in the mid-1920s. This number dropped precipitously during World War II, forcing Duke and Wake Forest law schools to combine for the duration of the war. After the war the school was faced with the opposite problem; returning men flooded the school, causing a “”G.I. bulge”” that at its peak reached of 300. In 1961 the first African-American students were admitted. To protest the North Carolina Bar Association’s denial of membership to its African-American graduates, the school severed ties with the Bar Association until applicants were accepted without discrimination based on race in 1969. In recent decades, the school has developed an international presence and grown in number of students, course offerings, and areas of the law included in the curriculum. 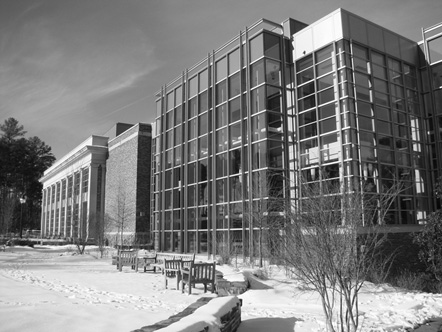