Dr. Martin Luther King, Jr., was slated to visit Durham April 4, 1968. Feeling his support was still needed at a sanitation workers’ strike, he made the fateful decision to stay an extra day in Memphis, where he was assassinated. The next day several thousand people marched peacefully, ending with a rally on the steps of City Hall, pictured here. The next evening, April 6, arsonists besieged the city, setting 13 fires. National Guardsmen were mobilized to allay the situation, and a 6 a.m. to 7 p.m. curfew was imposed. Despite the precautions, seven more fires were set the next night.

King made five appearances in Durham, most notably at White Rock Baptist Church during his second visit to Durham in 1960. As the sit-in movement that had begun in Greensboro, N.C., swept across the South, he addressed a crowd estimated at 1,200 people at White Rock, breathing new life into the movement. “Let us not fear going to jail if the officials threaten to arrest us for standing up for our rights,” King said. “Maybe it will take this willingness to stay in jail to arouse the dozing conscience of our nation.” 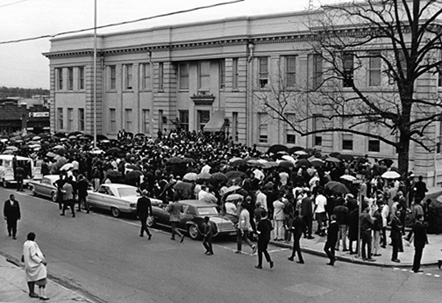