The Carolina Theatre opened in 1926 as the Durham Auditorium. It was the only theater in Durham that admitted African Americans, though the facilities were segregated, with separate entrances, ticket booths, seating, and lounges. In the early 1960s, when theater management refused to desegregate, demonstrators began a rolling line protest that lasted for months. When a protester approached the ticket window and was refused admittance to the white section of the theater, he or she went to the back of the line to try again. In 2003 one participant remembered the protest:

You just sort of grew strong as you marched—you were angry, and I guess that was where you were really getting your strength from, your inner anger as you walked around the Carolina Theatre in the rain … as you listened to people calling you names and spitting at you and everything. But, it was like a drive once you got involved. It was like something just kept pushing, pushing.

The Carolina was desegregated in the summer of 1963 and all of Durham’s theaters except the drive-ins were desegregated by that fall. 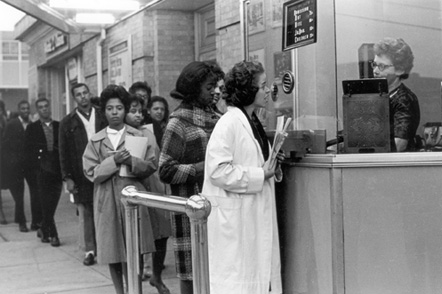