The Biltmore Hotel was built around 1929 in the Hayti neighborhood. In a time when the South was sharply segregated, the Biltmore was the preeminent hotel serving African Americans in the southeast. The hotel, featuring “unexcelled cuisine,” music, and dancing, was of such renown that children would flock to the Biltmore to catch glimpses of the celebrities it attracted. Ike and Tina Turner, James Brown, and Jackie Wilson all stayed at the Biltmore. A postcard from the 1930s advertised, “The Biltmore Hotel, Durham, NC. Half block from Union Station. America’s Finest Colored Hotel. All out side rooms. Running hot and cold water in each room. The last word in comfort. ‘Do It the Biltmore Way’. Atlas Barbee, Manager.”

As Durham was forced into integration, the need for businesses serving only African Americans declined, and so too did the Biltmore. By the 1960s, the Biltmore was “looking more faded than fashionable,” and reports of the hotel being used for prostitution surfaced in the 1970s. The Biltmore was razed in 1977.

Also featured in the photograph are two other notable Hayti businesses, the Regal Theater and the Donut Shop. The Donut Shop, a popular restaurant and meeting place which later housed WAFR, a radio station serving the African-American community, was also razed in the mid-1970s. 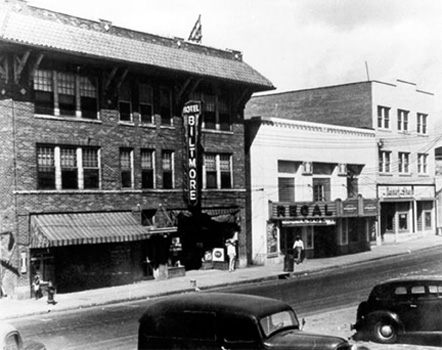