In August 1958 the Retail Clerks International and the Amalgamated Meat Cutters and Butcher Workmen of North America struck against all five A&P Tea Company stores in Durham and against stores in Greensboro, Fayetteville, and Salisbury. The strike followed a contract negotiation session that ran until 3:30 a.m. the night before, but which failed to produce the terms the unions demanded. The unions struck because of the company’s low wages of no more than two cents an hour to the part-time employees, who represented roughly half of the stores’ workers, and because of unequal pay for female employees. A statement issued by D. Earp, personnel manager of the local A&P, details the company’s inadequate concessions:

We offered the two unions an antidiscrimination clause, which was an issue. We also offered them a 42-hour work week. They are now working a 43-hour week. An increase in the wage scale from the bottom to top of $1 for female and $2 for male employees was offered. We feel that our offer is fair and in line with the competitive situation we are confronted with in Durham.

Store operations continued with the assistance of supervisory personnel and non-union workers, despite the 120 local strikers. 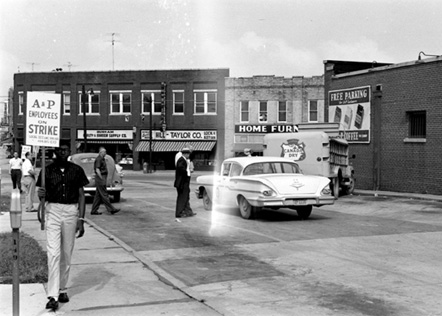